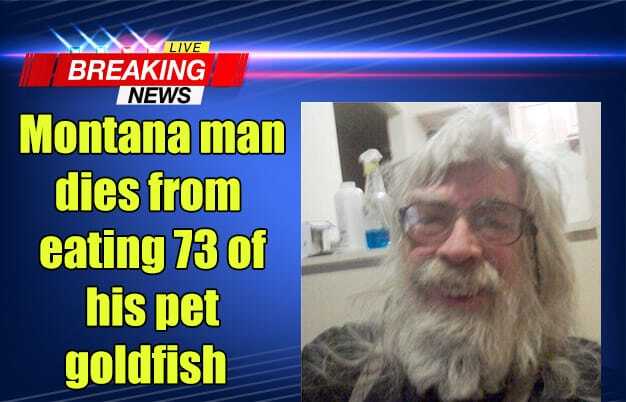 Missoula, MT- Arnold “Arnie” Wilson, 62 of Missoula Montana has died after eating 73 goldfish from his personal fish tank. The fish were too much for him to digest at once. With all of those fish floating around in his belly their feces began to pile up inside him and within 5 days he was dead from sepsis brought on by the bacteria created by the feces entering his bloodstream.

Arnie seemed to be doing fine until the Coronavirus forced him into quarantine. He was already weary of government control and after being told not to leave his home, he for whatever reason he decided to eat all of his goldfish that he had been raising. “Arnie loved them goldfish, I had no idea this quarantine would make him snap and eat them little suckers”, said neighbor Albert Grossman.

The attending physician, Dr. Ivan Chreznov, warns about the dangers of ingesting goldfish. “People believe it is safe to eat goldfish. Maybe they’ve swallowed one as a bet. You most likely would be fine from one or two fish, but 73 was more than his body could handle. Please use this as a reminder to stay calm and make rational decisions during these trying times”.