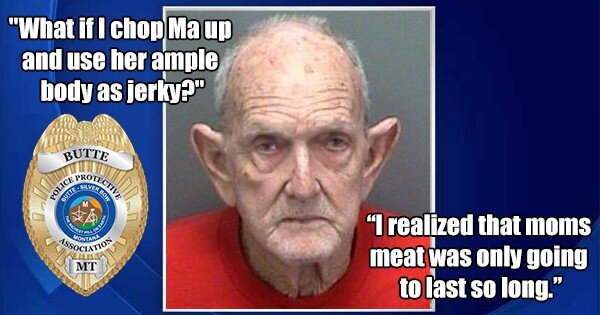 Butte, MT – In a strange twist of events Shep Arnold reveals to police how his debauchery began. “Jerky making has been part of my family for generations. My Grandad Earl Arnold was the best I’d ever seen. I always wanted to live up to his standards. Man I tried all kinds of different meats; deer, elk, cow, snake, turkey, sheep, lamb, goat, chicken, salmon. You name it I tried it”.

“No matter what I did I could never top my Grandad’s jerky. So I ended up making his jerky and selling it well after he had passed away. I never felt fulfilled. I had to make something that would bring me respect and praise, but I had tried every meat I could think of. That’s when the unexpected death of my mother happened.”

“You see we lived together and she had been housebound because of her size. She was morbidly obese and passed away in her sleep one night. I couldn’t risk EMT’s and firemen trying to cut a whole out in our home and cause a scene. I just couldn’t have mom remembered that way. Suddenly a thought occurred to me, “What if I chop Ma up and use her ample body as jerky?” At the least I figure I would get a good yield because of the amount of meat.”

“So I chopped mom up real proper and respectful like and got to making some jerky. While I won’t go into specifics on other ingredients, it was definitely the beginning of some of my best jerky ever. I put it on the shelf and labeled it “Shep’s Original” and for some reason people kept choosing that one. Word started to spread and I new I had surpassed my Grandad. I was happy as can be until I realized that moms meat was only going to last so long. That’s when I got the idea to hire summer help. The kind of helpers that could go missing without anyone the wiser.”

“All was going well until the damn guy from Jack Links showed up and took my jerky to their facility and tested it. If I ever see that guy I’m gonna do more than dehydrate him, if you know what I mean. Anyway you guys know the rest and here I am awaiting trail. I figure I’ll have to do some time, but hopefully I can put my skills to work wherever I end up.”

Keep an eye out for more updates on Shep here at