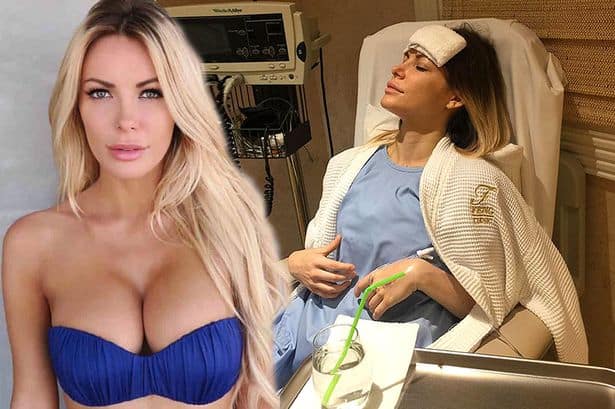 Chicago, Il- Stacey Leigh Adams (28), recently went through a nasty divorce with ex-husband Lance Adams. Stacey was caught cheating multiple times throughout their 4 year marriage. Lance went so far as to add a hidden GPS locator app on her phone to keep track of her. “There was just know way I was the only one hitting that poon”, says Lance.

Lance had had enough and filed for divorce back in late November 2019 and the trial date was set for March 26th 2020, but due to the COVID-19 pandemic that trial began, September 28 this past week. It was a straight forward affair (pun intended). There was a pre-nuptial agreement in place and the most shocking part of the agreement was that if their marriage did not last at least 5 years, Stacey would have to return the breast implants he had purchased for her birthday shortly after the marriage.

“I didn’t want some other dude enjoying her bolt-ons, especially when I paid for them”, said Lance. Stacey was a little upset as you can imagine. She never expected him to actually follow through with this part of the agreement. “I’m supposed to go to Cabo next month and now I have to leave my tits behind? I just cant. I. REALLY. JUST. CAN’T!”, says a distraught Stacey.

The judge and even his divorce attorney pled with Lance to acquiesce on this stipulation, but he would not. And surprisingly enough the court ruled in his favor. “Although this is barbaric and petty, it is also legally binding. Mrs. Adams you will have 120 days to have the implants removed and delivered to Mr. Adams”, Judge Thomas Hughes said.

We shall see what happens as the days tick away one by one. We here at Ringsssss.com would like to offer Stacey the chance at a photoshoot to help pay for her next set of knockers if she so desires.

Stacy has had her implants removed and is doing well. Luckily for her it was just the thing she needed as there was flaw noticed on one of the implants that could have caused a leak. She is now modeling swimwear for the small breasted woman.