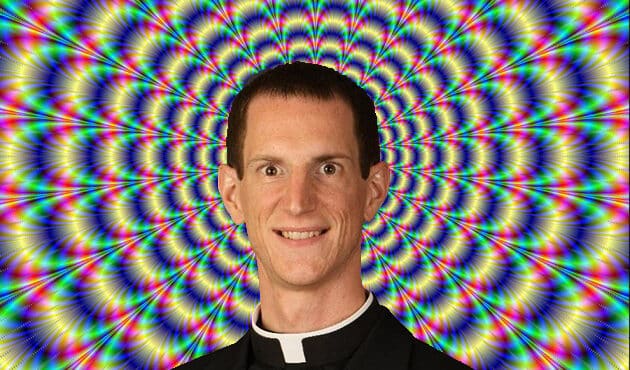 Father Brad McConnors (48), was arrested this morning leaving the house for his morning jog. McConnor’s is the most popular young priest at St. Peters Catholic Church in Springfield, Il. More people show up to his Masses than any others.

One parishioner said, “I can feeeeeeel the Holy Spirit talking to me through Father McConnor’s voice”. Another had this to say, “Ever since attending Father Brad’s masses I have begun to see the world in a way that was never before possible. It’s really hard to explain. Watch out for that fucking dragon!”.

Soon the other Priests of St. Peters began to be suspicious of this new insurgence of spiritually Father Brad was able to elicit from his flock. Soon McConnor’s masses were filled with spies to get to the bottom of what was really going on. Only problem was, they too were now becoming “Disciples” of Father Peter.

Finally a private investigation firm was hired to report back on any suspicious activity Father Brad may be involved in. Sure enough on day 3 of the tail, Father Brad was seen leaving a known Strip Club with a brown lunch sack. The PI’s called St. Peter’s with their findings and recommended checking out McConnor’s paper bag when he returned to the rectory. They did just that.

Inside were 10,000 communion wafers. But these wafers were different. Not the ones the other priests use. One of the elders joked that they must be tainted. Father Bekerin’s didn’t think the “tainted wafer” joke was just a joke, so he had the wafers tested by an independent lab out of Chicago. The results? Lysergic Acid Diethylamide, otherwise know as ACID!!

So that was the popular father’s secret. He dosed his flock! At first the other priests were not going to involve the authorities and handle punishment in-house, but that was advised against by the local area Cardinal. He was subsequently turned over to the Springfield Police Department and is now awaiting arraignment. He is being held without bail. His followers are picketing on his behalf.