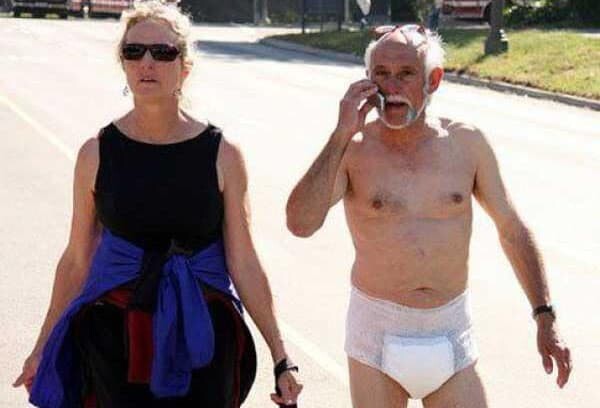 Dallas, TX- Ron and Shirley Attenborough have been married for 27 years. The kids are all off at college and now the nest is empty. Ron and Shirley fell out of love some time back, but stayed together because of a shared business.

Ron has taken to wearing a diaper in public and only a diaper until Shirley admits she did not tell the truth. Together they run a chain of successful restaurants and every one that they go to on business, Ron is in his damn diaper. Shirley is a total KAREN and is FREAKING out! “What is everyone thinking?”, “I can’t even even right now”.

All Ron wants from Shirley to admit she lied and he will go back to wearing pants. What’s this lie you say? Well ten years ago at thanksgiving dinner someone or something ripped the most awful fart that has been blasted out an anus before or since. Shirley blamed the golden retriever under the table and everyone believed her except Ron.

Ron knows the smell of Shirley’s farts. He’d been living with their atomic level power for 17yrs at the time of the great thanksgiving day fart. He looked her dead in the eye across that dinner table and she would not even blink. She is a level 3 Karen and not easily shaken. She won’t even entertain the idea that it possibly could have even been her. So for now it looks like Ron is gonna be taking a shit anywhere he damn well pleases until Shirley spills her guts.