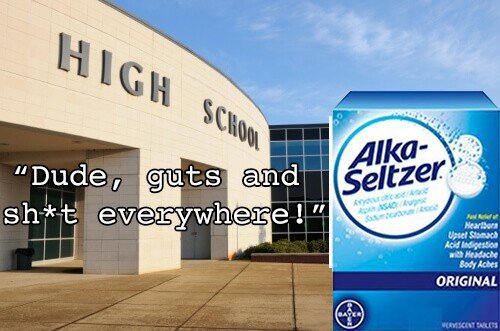 Seattle, WA- Three local high-schoolers have been expelled from school after they gave seagulls food stuffed with Alka Seltzer.

The names and photos of the pranksters will not be released due to their ages. and these “pranksters” thought that’s all this would be, a prank. Well they got that and then some.

The idea was to see what would happen if these ever present birds at school ingested Alka Seltzer. What happened was, the birds blew up and spread debris all over the students in the quad during lunch. “Dude, guts and shit everywhere”, exclaimed one student when asked about the incident.

“A beak landed in my coffee. I couldn’t believe it!”, says one teacher. The parents of the trio have not been much help saying “kids will be kids”.

Counseling has been set up for students who may need to talk about the exploding birds.